The House of Orange-Nassau began its rise to royal station in 1559 when Charles V, emperor of the Holy Roman Empire, placed one of his nobles in charge of the provinces of Holland, Zeeland and Utrecht. This noble was Prince William of Nassau and his title was stadhouder, literally deputy or "place keeper." 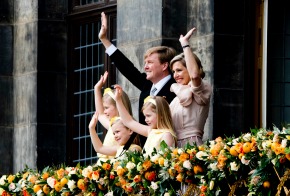 That William in fact refused to keep the place for his liege lord is one of the great turning points in Dutch history. William was the main leader of the revolt of the Seventeen Provinces against Philip II, Charles V’s heir in Spain.

The title of Orange came a little later in William’s life, when he inherited it from his cousin. The Principality of Orange is in fact in France, on the left bank of the Rhone north of Avignon. That a Dutch prince inherited that title is one of the twists of European nobility.

William’s uncle was Henry III of Nassau-Breda in Germany, while his aunt was Claudia of Châlon-Orange. Their son inherited the Principality of Orange after her brother’s death, and his untimely demise in turn passed it to William.

Queen Emma, William III’s wife, came first, acting as regent for their young daughter Wilhelmina, who was crowned queen in 1898. She reigned for 50 years, through two world wars and the Nazi occupation. Her pirate radio speeches during her exile during the occupation served as a beacon of hope for her people and she was hailed as a hero.

Wilhelmina abdicated in 1948 and was succeeded by her only daughter Juliana, who was succeeded in turn by her eldest daughter-of-four Beatrix in 1980. This year, Beatrix abdicated in favour of her son, the first Dutch king in 115 years.

Willem-Alexander has three daughters, however, so the crown won’t stay in male hands for long. His heir is his eldest daughter Princess Catharina-Amalia.